I visited Cambridge yesterday, I’ve been a few times before but this time I tried to concentrate a lot more on what was going on around me, mainly because of my interest in how the city works for cyclists. 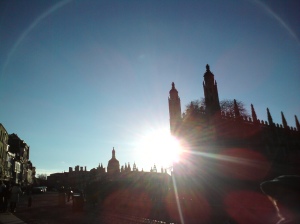 The place is full of bikes! Living in the midlands, where there ( to me ) seems so few, this seemed so odd – they were everywhere! Bikes of all descriptions – cheap crappy aluminium bikes, knackered old steel bikes, drop bars, hybrids, Dutch style, shoppers. There were quite a few singlespeeds – way more than I’ve ever seen in London – and there were both fancy fakenger / hipster singlespeeds as well as adapted bikes to make the most of singlespeed practicality in a largely flat city.

At first the amount of cyclists working their way around the city really threw me off and made me feel a little worried in places – and remember I am an avid cyclist who commutes everyday on one. But eventually I started to notice how the bulk of the cyclists I saw used the spaces of the city. They were far more aware of what was going on around them than any other road users or pedestrians . When encountering pedestrians – in shared spaces, where they spill out on the road and on the pavements and alley ways – they were much more aware of the potential dangers than we were. Consequently, they acted accordingly, slowing down, being more cautious and generally trying to make people (politely) aware of them. It was the same for road use too – I did wonder how motorists / van drivers / bus drivers thought of it. Were they used to it an acted accordingly? Or do they treat them with the same sort of disdain I encounter daily on my rural commute?

Either way – it was great to see so many people on bikes.