Have you done it yet? Do you like it? Is it amazing? I’m so late to the party – I haven’t done it, not sure I will do it either but want to throw in some thoughts about Apple’s iOS7 update and my feelings about it.

I sort of knew it was imminent and had being thinking about it mainly because I own an iphone 4 and was wondering if all the whizzing and banging that would come from the new OS would impede it in someway and the internet pretty much says ‘Yes it does!’ All this for some new icons, animations and that bar thing at the bottom of the screen that all looked very Android-y. But that isn’t what has got me upset about it, this is what has…

Picture the scene – you have your £399 iPad at the ready, Apogee audio I/O ( say an Apogee Jam, like me, at £79 or maybe an Apogee One at £299 ( definitely not like me )), you’re flicking on your favourite music app ( sorry, I think pretty much all apps are reasonably priced – £40 for a full DAW is a good price ) you’re ready to go and…..whoah the darn thing’s not working!!!! 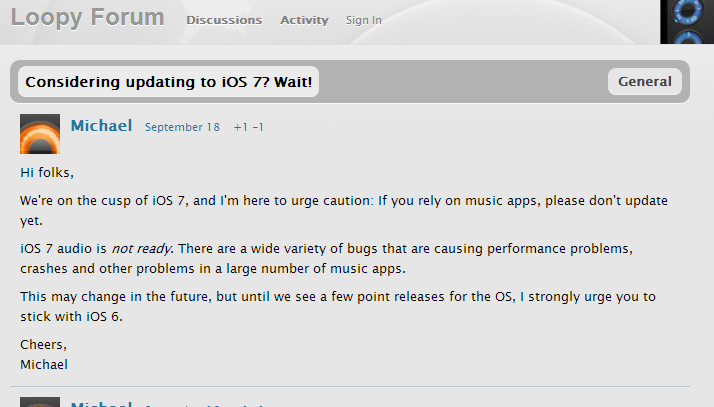 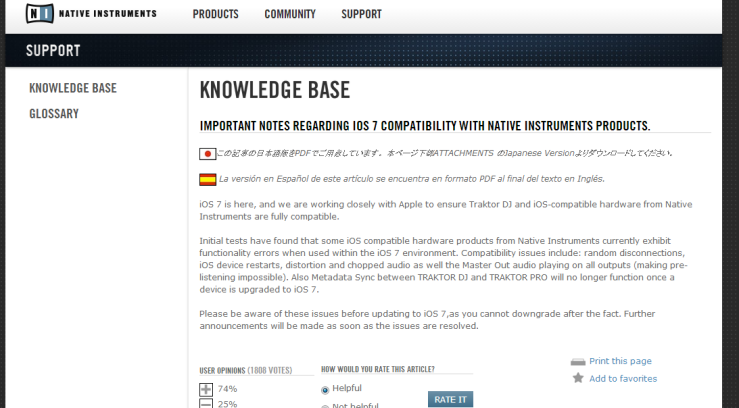 If that was me and this was the equipment i used to make my art I would be livid. Now, I only use a bit of it and I’m still livid. But why should I be surprised this happened with the 1st and 2nd generation ibooks and OSX where we were left with expensive kit that would only work properly once we hung around 3 years for USB audio to finally work! Yeah, that was me too!!

When you buy into a computer system you are, in effect, buying into a volatile ecosystem dependent on the whims of it’s inventors and owners. Apple has done the most amazing marketing job and owners of it’s technology ( for the most part ) adore it, because, ( for the most part ), it’s very well made and works well ( until it doesn’t ). PC owners are kind of different in that they cling to the OS they know best ( XP!! ) and refuse to let go until they have to or until they can figure Linux out. But it’s not just Apple here – we need app developer honesty too. If you’re using that iPod touch solely for what a few apps give you creatively, then they should darn well inform you when the device your running is going to start to suffer through their OS driven up dates. If something works for you, you don’t care what platform it’s on or what the icons look like because you just want to create.

And now to the crux of the issue for me and making music. A dedicated piece of hardware is exactly that – what it lacks in multi-functionality it should make up for in the fact that it does what it’s supposed to. I’m not naive enough to believe that’s all you need (though it could be) I’ve just been left feeling totally let down by the shift in OS and the ( the possible ) need for new equipment for it to work fully and not telling me about that first.

Which is a shame. My iPhone 4 is ace – I can take photos, make videos, record music etc etc – but how long for if I don’t subscribe to a vision of what my creative practice should be.