The second of my ‘trying to make a thing a month’. I went away to Norfolk for a few days in February and took my recorder and some contact mics (that I’ve never used before) with me to try and record some of the sounds of the reeds and the marshes. I love the sound of the reeds swaying in the wind, that ‘whooooosssshhhhhhh’. I’ve always wanted to walk into the middle of it crouch down and listen – except you can’t really do that as it can be quite dangerous.

Instead I attached mics to wires, flung the Zoom into the reeds and grasses, generally hung 25 metres back from my family as they walk ahead, me just staring at whatever was around me. My recorder’s headphone out doesn’t work so I have no idea what I have recorded until I empty it out on the computer. It’s a little like film photography, it’s always a surprise.

I’m not sure where the idea came from but the other night I decided I’d drag that whammo Behringer Condensor mic from the back of the wardrobe and try recording with it and using some headphones to monitor. I’m not a big fan of monitoring with headphones for many reasons – it’s hard to get the balance right; it shreds my ears pretty quickly; it’s just not the same as playing in a room in front of an amp. In the process of doing this I learnt three things.

Having no decent mic pre to hand I had to use the Zoom H4n as the mic pre then put the signal through the pedals. Then the output of those went through my Samson S-Mix and into a Minidisc (YAY!) to record ‘the action’.

First thing I learned? The mic preamps on the Zoom are pretty rough. They’re really noisy and only slightly better than those on the S-mix (which when using a phantom powered mic are awful). So a dedicated mic pre or a mixer with a decent gain section would have been most useful.

Second thing. All though the sound that came out the other end was quite natural sounding there is, as you’d expect, little movement in the audio field, which makes it a bit dull to listen to. On a psychological note – I did notice that when I heard a picked chord being played, the notes going low to high did feel as if they were moving in the sound field. Here’s how some of it came out.

The third thing? In this modern age, possibly the most important instrument any musician can have is a mixer. Any mixer with a couple of mic inputs, an aux send and a couple of outputs is the most versatile tool you could ever own. If I only I didn’t just sell mine. Doh! 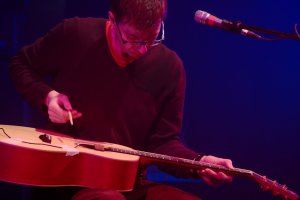 More action from the Y theatre show last month. I recorded the whole thing from the stage with my Zoom H4n and it did a pretty good job. Including picking up the squeaking drum throne that I was sitting on! See below for a section of the set. This piece has come togther from the improv’d gig I did with Misterlee Lee Allatson at The musician with Diane Cluck. Enjoy!

Managed to get out of work a few hours early a week or so ago and had a three hour spell to do some recording at home and make some noise before everyone was home from school. What did we learn? This is what we learned….

Doesn’t take too long to set up and get going with the Zoom H4n at all. Probably about half and hour to set up guitar and kit and then go. Managed to record 2 hours and 5 minutes of audio – it said so on the screen! Felt pretty good about that. Better still, I managed to review it all in the following two evenings which is pretty much a record for me.

And the recordings themselves? Well…Using a pick up instead of mics for the guitar is great. It gives the guitar a whole different quality – it’s not the same as mic-ing up but is quicker and sounds 100% better than the piezo. I like it, not saying I’m not going to persevere with the mic-into-looper-for-guitar idea, just for the moment the ease of using a pickup means I’m actually producing stuff, which is ace! All of the instrumental parts of these recordings sound really good, they have a distinct gentle but electric quality to them. All of the vocal takes sounded way below par though – a consequence of a 5 mile sprint home on the bike and rushing to get going? That’s what I’m going to put it down to. I tried to fit an awful lot in and this session definitely pointed the way forwards.

Out of the whole session, this edited piece came through sounding really interesting.

The mic on the Zoom is super sensitive and setting the gain accurately on it is a bit hit and miss at the moment. I have to be very wary of overloading the input so I end up recording very quietly. Add to this a lack of any suitable means for me to mix and monitor adequately and the end result is pretty quiet. I do like the quality of the Zoom’s mics though and they pick up everything including the traffic going passed the house.

So, not quite there yet but well on the road.